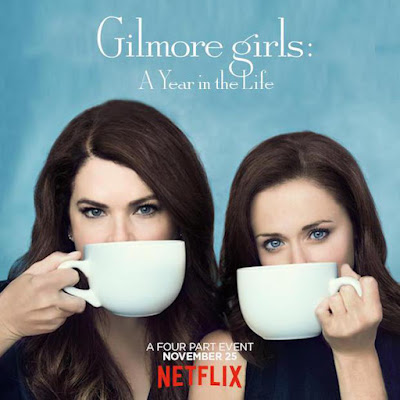 As a big fan of the TV show Gilmore Girls, I decided to watch the first episode of four that make up the revival on netflix called Gilmore Girls: A Year on the Life. All premiering on Friday, each episode is named after a season. I didn't stop after the first though. I actually binge watched all six hours of the mini series over like an eight hour period today. It was wonderful. I really enjoyed watching it on my sofa.

I adored the show back in the day. One of the main characters was Rory and she was the same age as me (during both the series and the revival). I approved that she was smart and loved to read. I could relate. I was also jealous of the two main characters though. I loved Lorelai and Rory's dialogue. I love the way that they speak, squeezing a lot in quickly with confidence, which is something an INFJ can hardly ever do! My favorite humor is that which is clever, so I appreciate all the (pop and historical) culture references. Their lines were a bit of a departure from real life, but that's what I loved as their lifestyle and environment was a quirky and wonderful world to escape to. I did own all the seasons on DVD until I decided to sell them to fund a trip to Italy.

I think all the characters (except Mr. Gilmore as the actor died in real life, but the character's death was central to the plot) returned for the revival. I was so happy to see all of them! Even the town troubadour! It was a stretch to include them all though... It felt like some were just making a cameo. Would I want these cameos to be skipped for the sake of the flow of the film? No. It was like catching up with old friends!

The last (and seventh) season of the TV show was not written by its creator, so with the original team on board with this year's installment, they could end things how they intended nine years ago. It felt like a true extension of the series. Pretty much nothing had changed for the characters in those nine years though! That made things easy. There was one quirky part that was entirely too long and I completely hated the last words of dialogue that ended this miniseries, but other than those two parts, I loved the revival. I laughed. I cried. I thoroughly enjoyed it. I love Luke and Lorelai together. I suppose that I can understand the ending. There had better be more episodes after that cliffhanger though! Anyway, Gilmore Girls proved to be a fantastic escape from life once again.

I don't tend to watch a lot of TV, so binge watching something is something different for me to do this weekend. Since both watching the first episode and continuing to watch happened spontaneously today and I didn't plan in advance, I didn't do it Gilmore-style, binge eating (takeout and junk food) or coffee drinking, but that's okay. It's entertaining. I recommend binge watching Gilmore Girls: A Year in the Life. It's like a book you can't put down.