Simple Pleasure Sunday: "Saturday in the Park" by Chicago

I'm feeling really good right now. You see, I was just dropped off at home following a lovely Mother's Day brunch with my family. As the waiter was pouring my first mimosa refill, I professed my love to him. Luckily, his fiancée is a bartender and not the jealous type! ...and then I totally never saw the bottom of my glass... Each time he would fill my glass, as he would, being in our committed relationship of course, he would tease me and I'm sure I blushed. I honestly don't know how many I had... I'm such a lightweight!

Anyway! On to today's simple pleasure which is a song. I've written about Happy by Pharrell Williams previously, which will always remain one of my favorite songs. I think when I turned on the radio at work on Friday, I was pleased that it was playing. I love upbeat music like Happy. I grew up listening to rock 'n roll from the 60s and 70s, learning about half of the lyrics of every song! I didn't really know who sang each song, unless it was The Beatles. Nowadays, car radios and Pandora feature the song title and artist on a screen, so I learn a lot each time I listen to music.

Last Sunday evening, I was doing laundry at my parents' place. While doing other things, they kept watching the Rock & Roll Hall of Fame Induction Ceremony on repeat until they had seen all the parts they wanted. In between loads of wash and dry, I caught Chicago's performance of Saturday in the Park. I loved it. I associate the band Chicago with my dad who loves music with a lot of instrumental parts to it. You know, like a great guitar solo. Of course, the horns from Chicago qualify. Even though I knew most of the words of the song and it sounds like a song Chicago would produce, I seriously couldn't have told you that this song was by them prior to last weekend. This is the song that I've had stuck in my head all week. Plus, the one I have voluntarily sang or hummed as I went about my chores. I'm not saying it's one of my top five favorite songs or anything, but I really do adore this happy song. Plus, there is an Italian song lyric in it! I had no idea until I started researching this song, preparing for this blog post. 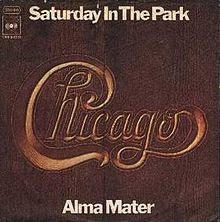 Here are the lyrics...

Saturday in the Park

Apparently, one of the guys in the band was having trouble writing a song, so instead he went over to Central Park and its 4th of July celebration inspired him. I love the meaning. The literal one is all the excitement of living in the moment during a celebration. And then with lyric, "I've been waiting such a long time," there is anticipation for an event. I think that in life, the longer you wait for something, the more you appreciate it. In addition, to me, I think that the line, "Every day's the Fourth of July" means anyone can elevate the everyday.

It was perfect for this past week since prior to yesterday, we have two weeks of rain or cloudy skies with the exception of two sunny afternoons (between morning rain and evening thunderstorms). As an INFJ, I do not relish discussing mundane topics such as the weather, but I really love the sunshine, so all that rain for such a long time was really getting to me! I've been waiting such a long time, for today! ...for the sun throughout this lovely Mother's Day! Finally!

This morning, I squeezed in a 20-minute stroll through the neighborhood in that glorious sunshine. I wanted to walk to see the azaleas, now in full bloom. They have been around for about two weeks now, but I only started walking to the store in the drizzle like three times this past week. Even with everything still a bit damp just before 9 AM, it was so nice... I snapped a picture of someone's front yard really quick... 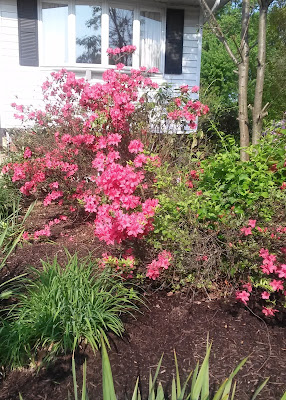 The dark pink azaleas are my favorite. I thought these shrubs had big blossoms.

For your listening pleasure, here's a YouTube video captured by someone at that induction ceremony...

Saturday in the Park