I had four new year's resolutions and the truth is: I have been struggling with them so far. You can read about them here. In an effort to reach my goals by holding myself accountable to others, I wanted to share my thoughts and feelings regarding each. 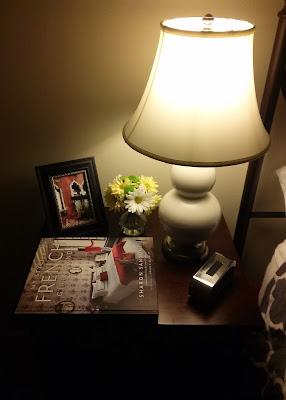 My nightstand.
Photo taken back in February.
Those flowers were part of a much bigger arrangement
by our lovely community housekeeper Y.

My first resolution was to blog more often, as in finally establish a regular blogging routine. I am consistent and reliable in so many other areas of my life that it is odd to me that I do not work on my blog as often as I would like. My intention was for readers to have a post Sunday and then another day that week, to post every few days. I set goals of 9 posts per 31-day month and just 8 for months with less. I am trying. And you know, I have published as frequently as 10 times a month before! Now that I said something about publishing, all of a sudden, it's difficult. As an INFJ, I do not revel in my achievements for long because I am always focused on improving. I'm pretty hard on myself. You see, I am really trying to develop other good habits recently. I am getting up earlier, jumping in the shower earlier, accomplishing more before work and during my lunch break, shutting down screens about an hour before bedtime, completing certain cleaning tasks on designated days of the week, etc. I have been making strides, especially improving over the past couple of weeks. My home has never been cleaner! So, I am still getting used to numerous routines that I think it's hard to add/get serious about yet another. I do have a plan though. Consistently rising earlier will allow me some time to blog nearly every morning and I have already started working on the blog before 9 on some days. Specifically, I am trying to get up at 5:40-5:45 rather than at 6 as well as do my first tasks like making, cooling and drinking my coffee quickly. Because burnt cool espresso isn't that great. I'm not a morning person so I need caffeine in my system for about 20 minutes to function, at all. If I get in the shower by 6:40 instead of 7 like I used to, then I would be ready for my day earlier and be able to squeeze some blogging in before I have to leave for work or get into what I'm doing on my weekend. I feel motivated to blog in the morning rather than when my energy plummets to zero around 7:30 PM. I will still try to hit those number of posts goals, but if I don't hit the goal one month, I shouldn't beat myself up over it! It is simply not the end of the world.

Entertaining more was my second resolution. I am proud of myself for hosting my first family dinner at Easter, but I need to keep it going! Things have been really slow at work, so I'm not collecting much commission. Hopefully things will start turning around this upcoming week and that means I will have more of a budget to play with as early as late June. Although, I can still be creative and invite friends over on a tight budget. I just don't have anything planned yet. I should!

My third resolution was to have fresh flowers in my home and with three arrangements, I certainly did during the week of my birthday. I will write 'flowers' on my grocery list about once a month and/or when I entertain and consider its purchase a non-negotiable. It doesn't feed my body, but it does feed my soul.

Lastly, in January, I resolved to lose weight in order to fit into my current clothing size better (since I can't afford all new clothing in a bigger size!). After birthday cake(s) and ice cream, I am up in weight. When this happens, of course, my clothing is tight. I no longer want to be uncomfortable. My weight usually fluctuates between my high school graduation weight of 145 pounds and my college graduation weight of 160 pounds. I feel fabulous at 145. I don't even feel like look like myself at the other end and it's becoming less and less acceptable for me to weigh that much. When I published my new year's resolutions, it seems I weighed 155. After that I went up to 160, but then worked to drop down to 154. During my birthday celebrations, I, unfortunately, hit 161, but have lost a couple of pounds eating a lot of salad in the ten days since my vacation ended. I will attempt to make healthier choices in terms of both food and portion size. For example, my pasta specialty this week will be loaded with more vegetables than usual. We have had gloomy weather lately, but rain will not be in the forecast forever and I will walk more. My favorite flower, dark pink azaleas are in bloom right now! I would love to get down to 150 and feel comfy in my clothes by July 8th (which is a pound a week) and then keep it off. By making this public, it confirms the fact that I will truly try.

Are you guys keeping your new year's resolutions or sticking to your goals? Are you having trouble? Or did you throw them out the window sometime during January/after you set them?