I had a busy day today. Having borrowed a vehicle late last night, I got up way early to run a couple errands and practice driving without a lot of surrounding traffic (since I have a fear of driving and don't own my own vehicle, so rarely do). I arrived at my grocery store at 7:30 to pick up food for the week and then at the garden center at Lowe's by opening at 8 to pick up a white geranium for my balcony. Unfortunately, they didn't have the color I wanted, so I bought a red one instead. Later in the morning, I passed an independently-owned garden shop just two blocks up and two blocks over from my parents' place and purchased two small (and cheap) white geraniums that I could combine in a single terra cotta pot. Even though I was only planning on filling one pot, I actually own two pots and saucers, so the fact that I now have two plants is completely fine. Plus, it gets it out of my closet. I plan to post pictures of my balcony decor as part of a more elaborate blog post either late June or early July. Prior to posting, I want to make another purchase and it takes time to work things into my budget.

Back at home, I quickly whipped up four batches of cookies, all from Betty Crocker mixes for a family event later that afternoon. After that and fixing myself up a little, including changing into a dress (that I will introduce to you in my upcoming summer capsule wardrobe post), I drove over to my parents' before 11 to start my laundry. My brother and dad opened their gifts just before going out.

At 1, we departed for a restaurant called Mission BBQ to celebrate my brother's June 10th birthday and an early Father's Day (which is June 21st, since my parents' anniversary is June 27th and they'll be away for about 10 days soon). It was a large party including the five of us (even my sister got someone to cover for her at work), my brother's girlfriend, my brother's longtime friend and my maternal grandparents. I love a good pulled pork sandwich! I had anticipated it and it didn't let me down; that sandwich was delicious!

Returning to my parents' place, we indulged in a dining room table full of dessert. There were five kinds of cookies (four from me: oatmeal chocolate chip, walnut chocolate chip, peanut butter, and sugar as well as dark chocolate-dipped coconut macaroons from a bakery), strawberries, an apple bundt cake and a couple kinds of candy.

Then, we went into the backyard and played some doubles badminton badly, teasing and laughing the whole time. I do not usually enjoy sports, but this was something different ...and just plain fun! It was a delightful summery activity. Even though it was hot and humid, I thoroughly enjoyed time spent outside. Each of us threw at least a round of horseshoes too, badly, again! I finished my laundry and then came back home to do a few other chores and eat a light dinner. 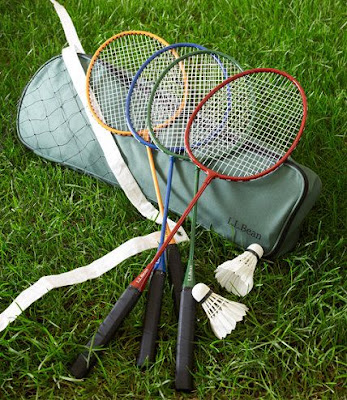 It was a good day today and even though tomorrow I have such intentions of baking breakfast for the week, making a phone call, planting my new geraniums, and catching up on more cleaning (that I didn't do last week since I wore nail polish Monday night through first thing Saturday morning. With a single at-home manicure, I strive to have paint on my nails four days a month. Style Hunter by Essie for June and Mademoiselle also by Essie for May's manicure.), I do hope there's a bit of contrast, that I have a chance to relax. I need a bit of time to do nothing on my (Sunday/Monday) weekends so I am able to accomplish what I need to do at work all week during my busy season. 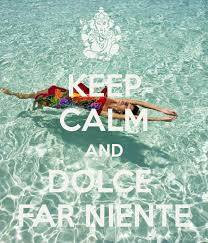 Italy Project on Facebook
Dolce far niente means "the sweetness of doing nothing" in Italian.