I had two of my high school girlfriends J and C over on Saturday night. They're pretty busy with their families, so I was thrilled to finally have time together scheduled. I served dinner. I wanted to share exactly how I managed to throw a fabulous dinner party for three with fairly severe time and budget constraints.

I happen to be immersed in what I call my "ramen noodles stage of life" minus the ramen plus penne pasta, tomato sauce and cheap Chianti. I make a sincere effort not to complain nor dwell on the negative. Furthermore, I do try to appreciate what I have and strive to live well within my means. So, my little dinner party was accomplished on a shoestring budget.

I was also crunched for time as well. Towards the end of the week, I realized that it had been a really long week at work. I was working alone three of the five days instead of just one. Two of those days I worked from 8:30 to 6 with a lunch break. We had a resident event, breakfast, so I walked into the office around 7:10 one day. Some marketing people informed my boss sometime well after opening on Thursday that I was having an Open House [at the apartment community] on Friday and Saturday. Thankfully, I elected to take a few vacation days this week, before the busy summer season starts around Memorial Day. I am off Sunday through Thursday. My workweek ends on Saturday at 5 PM, despite being exhausted, I agreed to Saturday night because they were available and I scheduled that dinner party to begin "anytime after 6." I did chill out on the sofa for five minutes before starting to prepare for the evening.

I do employ a regular cleaning schedule. Each day of the week, I accomplish certain chores. With self-discipline and trying to develop habits, I usually stick with the plan. However, I have been lax with my dusting and bathroom lately. I didn't have the time to do any extra cleaning prior to my guests' arrival. In fact, after 5, I only took out the trash. I also dusted the dining room tabletop with Pledge before heading to work that morning. My home is always straightened though, which many (if not all) regard as clean. Some people even take their shoes off when they enter my home even though I would never want or need this. I think they might do this because my carpet looks clean rather than their own custom. I wouldn't want them to feel like they're doing anything wrong by letting them know they may keep their shoes on. I suppose I "fake" clean well. This proved invaluable for my event. It's very Italian and French to have an immaculate house.

Additionally, I could have walked to a couple of nearby stores at 5 to pick up a bottle of wine I would look forward to, some antipasti and a small bouquet of flowers I could arrange on the table. But it was raining and there was a a chance of thunderstorms at 5:15 in the forecast, so I decided against it. One friend volunteered to bring brownies for dessert, which took care of that and the other texted that she would bring Coke and Diet Coke. They are not wine drinkers and one of them is pregnant (and the other is trying). That got me out of making sweetened iced tea. These two contributions truly helped me. I served a red wine that I had in my cabinet (received from the 'wine of the month club' gift membership). Normally, Malbec is not my favorite, but I lucked out since this one was perfectly fine and I actually liked it. I also chilled a bottle of white wine, a Pinot Grigio, which happened to go unopened. For antipasti, I simply cut up about eight squares of sharp cheddar cheese and placed them alongside a row of Harvest Wheat Toasteds (crackers) on a small olivewood cutting board. In lieu of fresh flowers on the table, I placed an unscented white votive candle in each of three clear Depression glassware little punch glasses. I also lit a candle with a rose scent in my living room.

I only have three of one kind of red placemat so I put those on the table where people were sitting. Another red one that coordinates with the set was topped with the food and drink. I used paper napkins and my regular (and only!) set of silverware and white salad bowls for the main dish. I poured wine into stemmed glasses from HomeGoods and soda along with a few ice cubes into plain glasses from Target. A Pandora station was playing from my phone in the background. (Plugged in because my battery needs to be replaced soon.) I also changed my clothes, wearing a black top with my jean skirt.

I failed to take pictures that evening, but two featured in this post are of my lunch of leftovers the following day. (I also had enough for Sunday dinner too.) 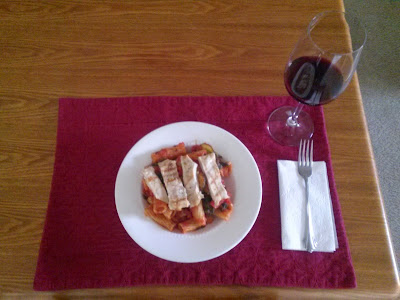 My main dish was pretty cheap. It was also easy. I used my pasta specialty, which is a 'go to' dish I prepare once a week. This time, I served Barilla rigatoni with Classico Marinara with Plum Tomatoes and Olive Oil sauce tossed with sauteed vegetables topped with grilled sliced chicken (seasoned with only salt and freshly ground pepper). My vegetables included red pepper, zucchini, halved grape tomatoes, and spinach. I only used half of a gigantic red pepper and one small zucchini instead of the two that I bought at the store so that I could eat them later in the week. I usually have so many vegetables in a pasta dish, they rival the amount of noodle used. I did not use garlic, onion, herbs or any other seasonings that could have added a different level of flavor. Nonetheless, I felt that the dish turned out well. The ladies really seemed to enjoy it and flattered me by asking for the recipe. 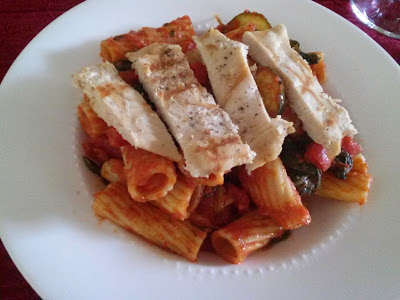 I had vanilla ice cream, chocolate syrup, whipped cream and sprinkles so I made the brownies a la mode. I served dessert in my white latte bowls from Anthropologie. The ice cream was on sale at the grocery store and I used a Cartwheel discount on the whipped cream at Target. Those two recent purchases I had in mind for either this evening or other entertaining this week. I had the syrup and sprinkles on hand. The brownies alone were delicious.

It was fun to catch up with the girls. Among other topics, I confessed that I am pretty poor and I suppose I couldn't hide my blindingly white, empty refrigerator when they put the leftovers in there for me, so I am pleased that since these two coupon and offered that I might reap their rewards as well. They also asked what brands I use in the bathroom and I showed them by opening my medicine cabinet doors. They will often get pasta incredibly cheap and even things like deodorant free. I could truly use that help and would be incredibly grateful.

I was so pleased that the girls so enjoyed themselves that they were sad to leave just after 9 due to family commitments and that they wanted to do this kind of thing more often. I would be thrilled to hostess more! Especially when I am now confident I can do so fabulously on such a tight budget.

I wanted to write this post to encourage my readers to entertain more at home. I am a perfectionist and am here to say that you shouldn't wait until your home and budget are perfect to start to have people over. As other lifestyle bloggers will advocate, your guests are absolutely delighted to receive such an invitation, they genuinely want you to succeed and do not point out what's wrong by apologizing for it. I have personally found this to be true. If you want to entertain, make it happen. Go with what you know and have. Simply have the desire and make an effort. This comes through.

As I mentioned, I am currently on vacation. With this dinner party on Saturday night and my coffee date with Kate, my time off has certainly started off really well. ...and I have more exciting plans for the rest of my days! In addition, I hope to publish a blog post every day through Thursday or at least work on posts so that I am keeping up with my average of 10-13 a month going live before the month ends. I feel so behind in all that I wish to share. There are at least a couple of (or a few?) book, movie and wine reviews as well as entries on other topics. Maybe I'll even work on my big summer capsule wardrobe post... I feel more like me (like I'm living up to my potential) when I express myself in writing. So, stay tuned!

Have a wonderful week! 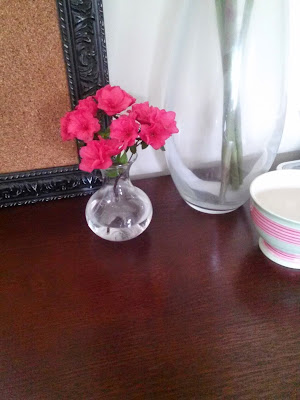