I rented a movie on my Kindle Thursday night. Since I do not own a TV, viewing it was something different to do for me and just what I felt like doing in the middle of a very stressful week. One of my favorite movies is Love Actually and I even love the plethora of deleted scenes among the bonus features of the DVD. The ones with actress Emma Thompson are among my favorite. I think she's hilarious. 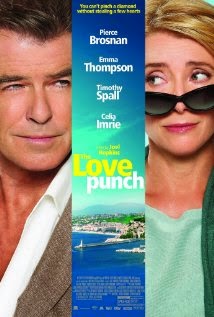 So, when I saw a movie recently released on DVD with her in it on Amazon, I had to investigate The Love Punch. I found the SD version of the 2-day rental cheap and downloaded it right away. It was pretty cute. Emma Thompson's character is divorced from Pierce Brosnan's character and when their pension is suddenly gone, they team up to steal an expensive diamond from the man responsible and his fiancee. It being a romantic comedy, of course, the two get back together again. Set in Paris and the French Riviera, it also had scenery that captivated me! It was nice to take my mind off the week's emergencies and lay in bed and watch the 90-minute-long silly story. It was spontaneous, but, just what I needed at the time.