While I was shopping with my mom on the Monday before last, I somehow lost the only pair of sunglasses I truly loved. I wore them on the ride to the mall, but they weren't in my handbag coming back. My mom refuses to carry a purse, so I was carrying her stuff plus various flyers mostly with a coupon attached that she had collected. Perhaps they slipped out when trying to remove something else. It was a lovely day spent with my mother, so I tried to not show that it was getting me down.

...but it really did... They were perfect. Not too big and not too little. They were just right. I do not happen to have high cheekbones plus I have full cheeks for a young-looking face. (You know me, I always want to look and be grown-up!) I believe these sunglasses did wonders for me. The thick curve of the frames in a style that's just a bit shorter and sleeker than a classic cat eye (without obvious wing corners) led the eye up, flattering my square-shaped face. They had brown lenses and tortoise frames which went with my dark brown hair. I felt confident in them. They were so perfect that I hardly ever looked at this product in stores since their purchase.

I suppose that I've had them for awhile. Looking at the photos saved on my computer, I'm wearing them as far back as the spring of 2010, meaning they were at least 3 1/2 years old. They may have been scratched up from nearly daily use, past their prime. Maybe the universe was telling me it was time for a new pair...

I purchased them at the Ann Taylor Factory Store, where my sister now works. I emailed her a picture of them last night and asked if she still sold them by any chance, but she reported back today that they don't have that exact pair, but currently sell something like them. I have also unsuccessfully searched for them online. I'll probably have to go with a similar pair.

I do own two other pairs: big black round ones (which I consider to be my Italian ones) and my oldest pair, a small, sleek brown rectangular pair with a tortoise shell frame. I much prefer my long lost pair. 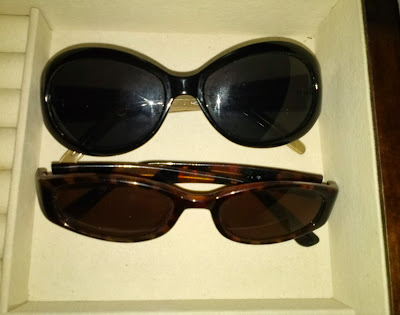 ...and so, the search for the perfect pair of sunglasses is on.