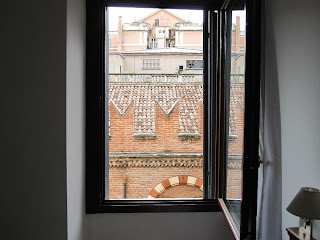 J's photo of a view out a window in Verona
I am a daydreamer down to the depths of my soul.

Of course I am very happy in my new apartment. It's a dream come true, and like I've said before I don't believe that I'll take it for granted.

...but right before I moved and since, I wondered what my next step would be. At first it was breaking into my field of choice, specifically some kind of position in a study abroad department on a college campus. Lately, I've been daydreaming what it would be like to spend most of my life living in Italy. I always said I'd live there again, of course, but for an undetermined amount of time. Perhaps a stay not requiring a visa would be just fine, under three months. I'm pretty sure I've rejected the short term idea.

I need to be surrounded by beauty. That I feel to be most beautiful. Like Italy's warm-colored buildings offering artisanal products on cobblestoned streets and piazzas. Maybe I've watched one too many episodes of House Hunters International lately! I envy the TV show participants, picking up to live overseas in a small, centrally-located apartment in, say, Europe or Scandivinavia, a lauchpad/ home base for travel all over a foreign continent. Of their preferences, they also often want something typical of the area and close to public transportation. I see kindred spirits in them. I also find little wrong with such small spaces. I definitely don't want to live in a big single family home with my own car parked out front. A small apartment or something like that in a city would fit me much better. In fact, I swim in my 681 square feet here, feeling very un-American.

Even though I loved my study abroad experience and overall it was positive, living in Italy is difficult at times, namely inconvenient and inefficient when directly compared to living in the US. Everyday tasks take longer. Plus, I have difficulty in speaking a foreign language. While studying it, I'm kind of a natural in writing a foreign language, spelling the words, but, alas, I'm pretty horrible at speaking without working it out on paper first. I suppose that's the whole thing about being an expat... It's a tradeoff. You just have to be in the place where you feel most happy, not entirely at home or fully comfortable in both beloved places. I feel so Italian here, but oh so American while living for any length of time there. Lately, I can see myself being happier there... Gelato is worth it, right? What comes as a bit of a shock to me is not how long I now want to stay but how much sooner I would feel that my time to be there will come. Possibly in my 30s? ...which only begin two and a half years away!

I always thought I work in my desired field of International Education in America, get married, keep the kind of American home I've always wanted too where I'd be the perfect hostess in entertaining before running off to Italy, a couple of decades away. Achieving those dreams first. ...but maybe all of those are not so crucial?? I'm not ready to put an action plan to settle in Italy in place yet, but should consider it much sooner than anticipated. Currently, I'm anchored by my debts, both of the credit card and student loan varieties. I would have to pay these off. As a moderate minimalist, I don't have so much stuff to sell off. I would definitely need to consider either a new higher-paying job or adding part-time work. I really don't have a good excuse for not having a second job. I think it might have to be retail! ...which I really wouldn't want to start that before Christmas or this winter. People suspect that since we've had a wet summer, that we will have a wet winter. I hate mixing that with retail. The news reporters urge people to stay inside during a snowstorm but the stores have to be open and you risk your life to get there, especially with that last mall I was employed in. Ugh...

Anyway, this is all something I've been thinking about lately, too much that I felt like I needed to get out!