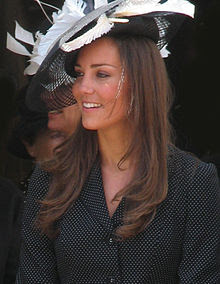 I've never really had a style icon... I may like a celebrity's style but then there's many of her choices I don't care for, so I don't think of the person as a personal icon. As an adult, I've always dressed for myself, not following trends in order to fit in like I had used to, and felt fine not having someone in particular to look up to. But after her engagement to Prince William was announced, I think I have found style inspiration in Kate. While I don't love everything about her style, like the big hats and riding boots, I don't really mind because they still look good on her! Who the heck wears a hat better than her??

I think's she's very beautiful and I think that's what you notice about her-- her long brown hair, her "charismatic" smile, her overall polish ...instead of her clothes, but she has chic clothes to complement her beauty. I often see the word "understated" in description of her style. I think this down-to-earth style allows her beauty to shine. She always looks great from head (or rather hat) to toe.

She has a classic style, which seems like her and doesn't change much season to season, year to year. Her clothing is always fitted, "body-conscious." I never liked anything with great volume-- huge ruffles or anything that uses the adjective "boyfriend" (as in the oversized "boyfriend cardigan"). I also like that Kate prefers tailored layering pieces, especially fitted cardigans, jackets and coats. And white over color, which particularly  interests me right now. I have been looking for white pieces lately, which are not so easy to find! She pairs white, often in the form of white pants, with neutrals. If Kate wears a print, it's often a nice and bold one, even geometric. She will vary texture, suede with denim for example. One of her style staples for a casual look is a pair of jeans. She often wears skirts. Like Kate, I adore wrap dresses too. I thought the blue Issa wrap dress she chose to wear for the announcement of her engagement was stunningly beautiful. Her gowns for fancy occasions are fabulous on her. If she accesorizes with more than a hat, it's a single long, dainty necklace which I should try more of... She layers it on top of any look, casual or elegant, which is something I should consider. It all seems chic yet effortless. I wouldn't mind if my personal style be described as "put together" without looking like I was trying too hard. Effortlessly sophisticated. Of course Kate's style will change when she enters the royal family,  more customized for her, only to be more elegant I'm sure. This chic commoner will probably change the look for future royalty.

Her style is representative of a group called "Sloane Rangers" or "Sloanes." They shop in Chelsea where one of the streets and squares are named Sloane. This is kind of UK's answer to the American "preppy." The style is going through a revival and it has some history to it. Diana was truly a Sloane, especially before she married Prince Charles.
Posted by Michelle at 7:56 PM