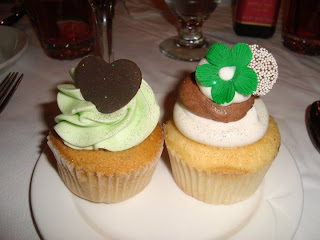 Wedding Cupcakes
﻿Photo Credit: my friend M
I worked in the home department at JC Penney seasonally through college. One day a customer told me and my co-workers that she just attended a wedding and it was very small and so beautiful because it was just about the love that couple shared. This always stuck with me and I decided that I wanted my own wedding to be small and hit the same tone.

B and N's wedding the other weekend was the closest example I've witnessed so far. They only had 48 people attend, which was mostly family. I felt like everyone knew of each other. Pretty small. The couple also loved each other very much. They've been friends since the 7th grade, started dating during senior year of college about four years ago, and lived in France for a year. The pastor summarized this history at the beginning of the ceremony in the lovely chapel at the University of Virginia. They wrote their own vows. B said how she loved that they grew into adults side-by-side. N could barely get through his vows where he said he couldn't believe he was marrying his best friend. So sweet; I started crying too!

B looked beautiful. Her dress was strapless and fitted with a small train. Lace covered the fabric and pearls lined the straight neckline. The string of pearls around her neck were probably her grandmother's originally. Her veil with a simple scalloped edge was pinned by a pearl-studded barrette.

The wedding and reception were very personalized, very them. It was also very casual. Heck, I heard the rehearsal dinner was catered by the Mellow Mushroom! A flowergirl made up the bridal party. At cocktail hour, miniature pigs in a blanket were served. Instead of a wedding cake for the guests, they had cupcakes- pound cake and spice cake with vanilla and chocolate dollops of frosting with green glitter-- to go with the pale green and chocolate brown wedding invitations. During college, B, ever the practical one, was inventor of the cupcake brownie so they could easily be shared. I love to bake and my friends always indulged me in this. Anyway, the wedding cupcakes were so delicious, so much so I couldn't decide which was my favorite!

The reception at a nice hotel was fun. Each of the six tables were distinguished by a postcard of a European destination that they sent to their parents while living in Lyon, France. I was kinda surprised to be seated at the bride and groom's table, marked Lyon of course (where N proposed). I'd love to do something like that for my own wedding. The five of us close friends attending all unintentionally wore some combination of black, red or dark pink that looked red, and everyone noticed this matching. This, however, is of little surprise to me, as all of us often emerged wearing the same color many days, but that was back when we were on campus and really close. I wore a classic black wrap dress I adore and that I was so comfortable in to boot!

There were three toasts, made by her father, his sister and her brother, all funny.  The most moving gesture for me was when N sang and played "Real Love" by John Lennon on the piano, which, again, made me tear up. I mean, isn't that the sweetest thing you've ever heard? After a delicious dinner (and lots of red wine for me), we danced. The 7-year-old flower girl was totally busting out all these moves, a different old school dance move like very 30 seconds! I got to slow dance with B for half a song as we were each other's first "spouse" (really just college roommates for four years). Since I'm the more easy-going, I teased her that I hope she's leading because, between the two of us, I'm totally the chick. They also played our college group of friends' song, Neil Diamond's "Sweet Caroline." B's father and brother are big fans and got us into it.

So now for some more trip details... I took the train to DC and then the Greyhound bus to Charlottesville, which was late. Then, I took the free trolley to my hotel, Courtyard by Marriott, which was nice. After checking in, I headed over to B and N's apartment for a "drop-in." I don't go to a party empty-handed so I brought some chocolate chip cookies I baked, which were a huge hit. I've already stayed at their apartment so that wasn't new to me, but I did get the chance to meet N's family. I also took the opportunity to check out their scrapbook of the France trip wonderfully created in My Publisher. B also announced to the room that I was her first live-in significant other and that when N did some things, she would reply "Well, that's not how Michelle handled it." You see, B and N both prefer to be in charge, while I very much do not.

When they departed for the rehearsal, I returned to the hotel to collect our friends, arriving at different times. The five of us went to the restaurant B chose to have a drink with us later to have dinner. It was so great to catch up with them! Our friend F attached tulle to a tiara for B to wear. Lots of picture-taking commenced ...in usual college fashion. I wonder if any other time in my life will be more photographically documented than college... Anyway, I caught a ride back home with J. At first, we had to drive through some intense fog! J and I went for alittle walk hours before the wedding and J, F and I also walked the long way to the reception in order to walk a bit through the lovely downtown mall area, but I still am left wanting to hang out more there. I'll definitely have to visit my favorite newlyweds! :)

I would love a small wedding like this, even fewer than 48, much to my mother's dismay I'm sure (and she doesn't even like her family!) ...but, for me, it wouldn't be casual. I would want my reception to be an elegant, sophisticated, authentic, multiple-course Italian feast, done properly down to appropriate red and white wine glasses, no DJ or dancing. Maybe at a small, local Italian restaurant... Just fine food, friends, conversation, laughter. When I told a friend this, she quickly replied "that's you." This post is filed under travel and I would love quite an extensive honeymoon in Italy, rather spend money on that! I also want the dress. I'm working on meeting the groom...
Posted by Michelle at 1:53 PM