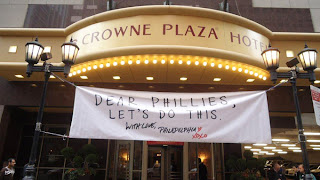 Photo Courtesy of the Crowne Plaza Hotel
﻿
The Phillies are currently winning in the 7th inning of Game 5!
Come on you guys!
This is the fifth game of the National League Championship Series. They are beating the San Francisco Giants. The winner of this particular series of games goes to the World Series. If the Phillies do it, then it'll be their third consecutive year. I was living in Philadelphia in '08 and that was somethin'... Anyway, I'm so proud!

I also adore the latest tourism campaign for the city. Postcard writing signed "With Love, Philadelphia <3 XOXO." ﻿I may be partial to postcards since I am a penpal [to an Italian girl; does that surprise anyone?], but it's fun and clever... as well as supportive!
Posted by Michelle at 10:28 PM