I spent Sunday in Philadelphia. I picked up the guy I'm dating, J, at his house, got breakfast and then drove us to Baltimore to catch the Megabus, a discount bus service, the rest of the way. The ride was good and oh so cheap, so I highly recommend it! On the way, J gave me the June issue of Budget Travel with "Rome" big on the cover on top of a cone of gelato. Isn't that thoughtful? :) I had also picked up a book from the library, another Italian travel narrative. This one's called "Extra Virgin, A Young Woman Discovers the Italian Riviera, Where Every Month is Enchanted" by Annie Hawes. I'm only a couple chapters in, but it's great so far.

Anyway, I take him to see the LOVE sculpture featured in my post last week, followed by a nice park called Rittenhouse Square and then to this Italian market, cafe and cafeteria called Di Bruno Brothers. He loves cheese and gourmet food so he loved it, way more than I ever did, and I practically had to drag him out of there! He got to sample lots of different kinds of cheese from the stands towards the back of the place. 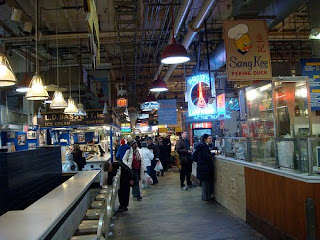 A View of the Reading Terminal Market
Next, we met up with my old Art History friend, L, at my favorite place in the city, the Reading Terminal Market. This is a huge indoor market for groceries and eateries. J and I had cheesesteaks while L had sushi. We actually found a table on a weekend. L entertained us about how everything went wrong while working in Greece this summer. The three of us also hit Chinatown where we shopped at a bigger store there. After that, L had to go prepare to teach her very first class the next day. 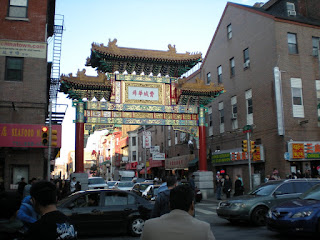 Philadelphia's Chinatown Gate
J and I walked to South Street. South Street is electic. It has restaurants of different types of ethnic cuisine, cheap accessory and shoe stores, art galleries and counterculture type of shops. In fact, back when I was living there a year and a half ago, I reported to a neighbor that I had discovered that street one day and he told me he thought I needed a tattoo for admission! When J heard I hadn't been to this gallery space where all the wall, floor and ceiling surfaces were covered in mosaic, we decided to go. This was not what I had expected! There was nudity everywhere. Specifically sexual parts painted onto the fragments. Afterwards we both said that nothing made us stop and say "I like that." Then, we chilled out with a beer at an Irish pub (as it was in the 90s and sunny). We walked to the end of the street which overlooks the Delaware River.

We decided a cab would be smart to go back to where we started. This gelato place I remembered was closed (in that heat!), so we ended up at Di Bruno Bros. again for it. That's right, we ate a greasy cheesesteak, then drank beer, then had gelato. I pretty much have an iron stomach and he had a sore throat, so... that's what we did! We also shopped around that nice shopping district there. It's made up of two streets, Walnut and Chestnut.

I had to catch my bus back and he was picking up a rental car at the same time to continue onto Atlantic City. I love that he's a traveler too. This was actually my first day trip, or vacation for that matter, with a guy and it was good; we had fun. He received more of the Philly as a Local tour than a truly touristy one. I think he liked the city too. I just love it and wouldn't mind moving back.